Rule the waves; waive the rules.

For those contemplating a bid in the 2016 (or future?) Race to Alaska, this massive R2AK-2015 spreadsheet that Thomas and I used to plan & track our efforts may be of interest —

One of my favorite parts are the “collaborators” tab which lets you sort through the full race teams in lots of ways.  Here’s an extract sorted by progress, including those that finished as well as those that didn’t finish but made some degree of progress to the north of Victoria.

I also like the beach cat comparison tabs, our different food tabs, the many lists, our training logs, and of course our ~2-month build of the main part of the boat (less the rig) —

After three weeks in the shop, Manu-o-ku is reassembled at Sail Sandpoint. We went from truck top to pedaling away in 1hr 20 minutes, then spent about the same time pedaling and paddling.

Here are the ship track and speed plot screengrabs from iSailGPS. 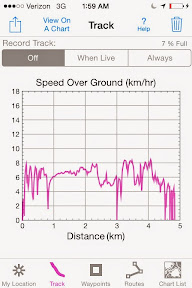 It is a synch to maintain 6.5 kph, but you have to mash & suffer a lot of noise (especially belowdecks) to hit 8. Not bad for the first iteration using Gary’s SS shaft & Rick’s SS propeller! 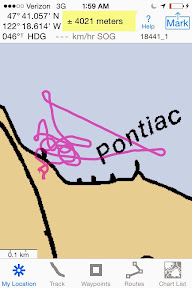 The tramps worked great, including retracting quickly to allow paddling on the inboard side of each hull.

Next step is to finish up the new mast and prepare to consult with James & Hanneke next week about the rig (in Greece)! 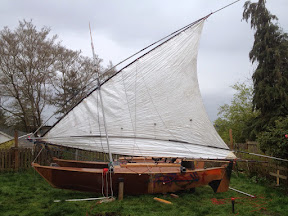 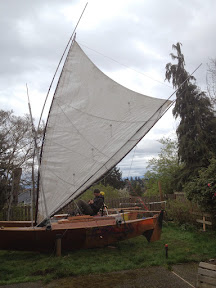 For the 2016 R2AK, I want to build and race one of these.  Whose in?  Crew of six. Thanks Jan Egil Bryn for alerting me to this video on Vimeo.

It was a good day on the lake.  We even sailed for awhile.

We held Tiki Tuesday on Thursday night this week as Kiko came to town from Hawaii yesterday.  He brought us a couple of gems;  a big bright yellow sail made by Warren Seaman himself and an intriguing option for the human propulsion side of things.

Shop time was mainly used to catch-up and work on a project for Kiko so he can get his Pahi 26 in the water tomorrow.  Thanks to Tim for sharing awesome beer and cat food can alcohol stove designs, and to Ty for lending a hand again.

Shortly after Thomas and I decided to register team Sea Runners for the Race to Alaska (R2AK), we decided we should honor our boat-building experience — as well as James Wharram himself — by using the Wharram Hitia 17 design as the foundation of our race boat.  Since Thomas is an architect and we both have built Wharrams (he a Tiki 26; me a Tiki 21), we hardly looked at the plans after laying out the hull sides and bulkheads.  In fact, we’ve made a lot of modifications to keep the boat light and otherwise adapted to being powered by humans and the wind, rather than a motor.  (The key rule of the R2AK = no motors!)

This post documents our 1-month build of the hulls — from plans to floating…  First we present a fun build video that my son, Liam, put together during a “Tiki Tuesday” in a matter of mere minutes.

Below you’ll find a gallery of selected stills followed by the day-by-day build log.  Enjoy!

This was a fun, fast build for us that made us feel confident that deciding to build a Wharram design with which we were familiar was a good strategy.  We didn’t clock our hours exactly, but estimate it took us about at most 250 hours (42 days x 6 hours) the build time for the Hitia 17 advertised on the Wharram web site.  (This confirms our suspicion that the build times and boat weights listed on the Wharram site are pretty ideal — maybe pie-in-the-sky.  For non-expert builders, we advise multiplication by 1.5 for a more accurate estimates…)

Here’s a calendar of the build.

On a fateful “Tiki Tuesday” — September 23, 2015 — we decided to take the plunge and enter the Race to Alaska.  What a great chance to challenge ourselves in some of the most beautiful seascapes known to sailors!  Add the intrigue of finding a design that would be optimal for human and/or wind power in the complex marine environment of the British Columbian coast, and we were hooked.  Plus, the process of getting ready to race would definitely get us both more physically fit!  Maybe we would get really hardened by the training and end up reversing the feats of The Sea Runners — those hearty Scandinavian canoeists who made it from Baranof Island to Astoria back in the mid-19th-century?!

For the first week we thought a lot about whether it should or could be done in a Hobie 16′ or 18′.  We were pretty inspired by Matt Sornson’s video about Minor Threat — their 2013 bid to win the Everglades Challenge by sailing and paddling a Hobie 16′ — especially the part where Sailor Jerry boosts morale (3:02).

We tried sailing a Hobie 16′ out at Sail Sandpoint and quickly had a lot of questions:

So we dried off and thought about what fundamental goals we had for our R2AK boat.  We settled in on 2 key ideas:

This led us down to the UW/WAC yard to visit the Tiki 21′ (Scott’s first Wharram) where we considered whether we could reduce its weight and windage sufficiently by replacing the rigid cockpit platform with a net like Rory did on Cooking Fat, and maybe by cutting its cabins off flush with the decks.  Even with such changes, though, we realized it would a big boat for 2 and would still weigh a few hundred kilos unloaded.  Could a different Wharram offer just enough shelter for a two-person crew and be much less massive, enabling meaningful movement by a single person?

Then we saw this photo of a Wharram Hitia 14 which weighs in (unloaded) at only 86 kilos.

It has awesome sailing speed and displacement, but looks just about as wet and unaccommodating as the Hobie 16′.

At last, we learned that the Hitia 17′ is plenty fast (15 knots, or 28 km/hr, steady on a reach in SF Bay) and has little holds or lazarettes in each hull.  Most people use these holds for storage and sit on top of their hatch covers while sailing, but others were innovators and got down inside the holds themselves:

This helped us realize that the bulkheads forward and abaft of these holds were just about as far apart as we are tall.  Perhaps with some modification of the central bulkhead (#4), the Hitia 17 could accommodate a sleeping human?

And thus, the dream of Manu-o-Ku was born…